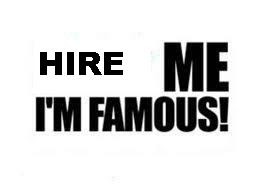 A few weeks ago I wrote about the radio industry's unwillingness to cultivate new talent and opting to go for celebrity hosts.  While that post was prompted by a heckle from my former colleague, this is in response to Kuli Roberts' appointment as Bob Mabena's cohost on the Kaya FM Breakfast Show.  As far as I can tell, gossip and man bashing are her specialities and oh, she's famous.

I'm not suggesting that she will not be good on the radio or that she shouldn't work but the scourge of shoving semi-celebrities onto the mic in hope of big ratings is not unique to South Africa.  In the UK or instance, Johnny Vaughan went through a string of them - during his 8 year tenure as the Capital Radio Breakfast Show host - in search of that much sought after female voice.  In the US it's a bit different, every blogger you know could have a prime time radio/TV show in the next 5 years. Harvey Levin of TMZ and Perez Hilton both have radio shows and, as far as I can tell, their only qualifications are that they're the purveyors of gossip and at any given time they can tell you which black sportsman the Kardashians are fucking today.

If you're not a celebrity, you'd have to be very lucky or connected to get started on the radio today.  Even then forget about what your vision of what you want to do on the radio, there are formats and playlists that are researched and you have to adhere to them.  By the time you make it to a mainstream station, if you do, you'd be indistinguishable from all the dross that permeates the medium and that will be that.  You'll realise that it's just like any other job: you do as you're told.  If you're under 20, I'd say don't even bother with radio.  Research suggests that your peers with access to smartphones are shunning the radio and cite the net as their dominant new music discovery method, so I would head there and start building an audience.  You do what you like and there are no gatekeepers.

The radio is at the bottom of the showbiz ladder.  It used to attract the people who liked and wanted to play music or were just talkative and thought they were interesting or funny that were not good looking enough to be on TV.  Now, thanks to the advertising budgets it's able to commands, it's all about companies fulfilling their your licence conditions and selling as much advertising as they can.  Screw creative ideas, originality and entertainment.  If they're doing it across the road and it's working for them, we better do it here too.

I suspect that's why Ms Roberts has been brought in to "add a female voice" as Greg Maloka, Kaya FM's General Manager puts it and it doesn't hurt that he's on a TV gossip show. This is one of Howard Stern's least desirable legacies to radio: female voices the extent of whose contribution to the alpha male's show is giggling on the background as he pontificates and reporting celebrity gossip.

This is just another example of how ungrateful radio can.  Bob Mabena has put in two decades worth of work,  toiling, honing his craft and almost overnight, he gets a gossip monger foisted on him.
Posted by Unknown at 20:03