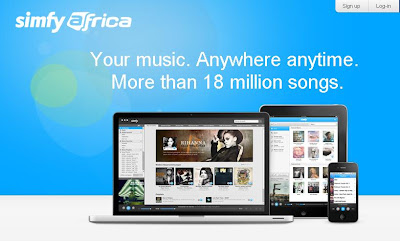 While people in Europe, North America and Australia have been enjoying the music streaming service, Spotify for some time now, South Africa has been feeling rather left behind.  From today South Africans have access to a similar service called Simfy Africa, an African arm of the German company Simfy..

The service comes as a reprieve to the long suffering internet savvy Saffas who are usually the last to get the nice and shiny things the internet has to offer.  Unlike Spotify you have to pay for Simfy as they don't appear to have adverts yet.  We all know that since Al Gore created the internet it's known as a source of free stuff as Spotify have found out, only 8% of their 32.8 million users are willing to pay for it.

They've done well to convince the record companies to agree to the idea of downloading the music for offline listening.  R60 per month for access to 18 million tracks with the ability to download and listen afterwards is a pretty good deal.

So why don't you sign up for their 14 day free trial and see if you like it?  At worst, you'll get to listen to music for free for a fortnight and at worst you ears will bleed and that will not be Simfy's fault.