If you have access to Mila Kunis' boobs, don't let them go 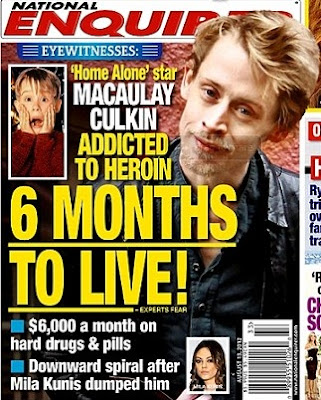 Unless you're Ashton Kutcher now or a D list Hollywood actor in 5 years time, chances you'll ever have access to Mila Kunis boob are currently hovering somewhere between never and only in your dreams.  If Macaulay Culkin is a our point of reference, then you're probably better off  just fantasising about them.

The National Enquirer has been consistently reporting that he was left distraught when they broke up a few years ago, so much so that he took up drugs to console himself.  They've even gone a step further, challenging him to take a drug test to prove them wrong and claiming he has months to live.  If I were in his shoes, I'd be a bit miffed too.  Not because she left me but because she was with me until her career took off and she was off.

So in the unlikely event you ever work yourself in a position of unlimited Mila Kunis' boobs, hold on to them for dear life because if you let them go the results could be catastrophic.