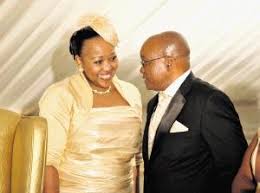 “We can’t have prisoners released because the President woke up feeling happy.”

You'd be forgiven for thinking that those are the words of somebody like Lindiwe Mazibuko OR Justice Malala, but no.  They came from one of his wives, Tobeka Madiba-Zuma (I have no idea what her name is - I've seen Tobeka, Thobeka, Mabida, Mabhida, Mabija, Mabhija and Madiba.  Can she release her ID document and settle it once and for all?)  Anyway, she was addressing some public gathering in KZN midlands and said she was perturbed by the news that one of the prisoners who had benefitted from a presidential pardon was already behind bars.

Traditionalists will be troubled by this apparent deviation from normal Presidents' spouse duties such as cutting ribbons and smiling for the cameras by publicly rebuking the President.  Some will even see it as undermining the President's integrity.  Mrs Zuma also reminded her audience that she doesn't need to go through the many layers of government bureaucracy to get the meeting with her husband.

That may be the case, Mrs Zuma, but let me remind you that you're the third lady.
Posted by Unknown at 14:10