No more Australian brilliance at the Olympics?

A few Olympic games ago, you have expected Australia to be near if not at the top of the medals table by now.  They used to excel at the swimming events and dominate at the entire event but this time around they are no where to be seen. 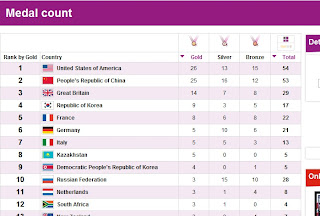 They used to be so dominant, my British friends would often joke that the only reason Australia was invented so that they can win medals on behalf of Britain.  As you can see in the chart above, Great Britain is doing quite well by itself.

And, as we can see here the Aussies are not even in the top 20.  Even their arch nemesis Maybe it's time Her Majesty wound up the country and hand it back to the indigenous population.  G'day mates.