Who's this man who tried to stop Usain Bolt from winning the Olympics? 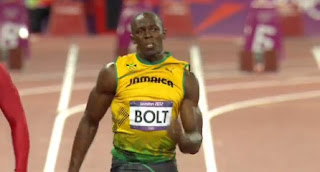 Usain Bolt won the London 2012 Olympics yesterday.  I say won the Olympics because let's face it, they could show just the 100m and nothing else and nobody would complain, apart from the athletes who participate in them, their families and people who want to watch them.  Other than that nobody cares.  Not only did he win but he clocked 9.63secs to break his previous record making him the fastest man on the planet. But some asshole decided to throw an empty beer bottle behind the athletes just before the gun went off.  It looks like Bolt had exchange a few worlds with the man minutes before the race kicked off and appears to be saying  (see video below).

Needless to say Scotland Yard have got him in custody and let's hope he feels the full Majesty of the law.  He almost ruined The Olympics a transgression which, in my administration, would see him visit the tower never to return again.