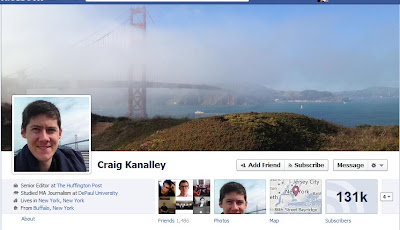 There must be something in the water at Huffington Post offices that makes it's occupants feel entitled to copying other news outlets stories and pasting them into their own website, linking as they call it to, it now turns out when it comes to sexual parters, they just outsource.

Craig Kanalley, one of their Senior Editors, wrote to his 131k facebook subscribers last he was looking for a girlfriend and has not been able to meet girls since he moved to New York 35 months ago and was essentially asking them to come up with suggestions as to how he could get some New York female company as he was confident that he's a keeper.  Predictably, he was deluged with messages from women telling him how sweet he is and suggesting what he could do to make himself a babe magnet.

I think Mr Kanalley would meet young ladies if he actually met people and not spent all his time harvesting the interned for Arianna.
Posted by Unknown at 00:01