Remember not to get rich in the USA 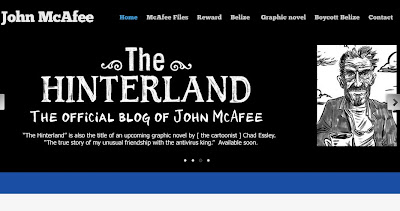 If wanted fugitive, John McAfee's blog is anything to go by, living in a lawless, gun-toting South American banana republic is far more preferable than living in his native USA.

It's not because the USA is a bigger a lawless, gun-toting country itself, no matter what Fox News says; Mr
McAfee turned his back on a relatively stable, free and safe country and moved to the middle of nowhere so he could save a few millions in tax.  Now he's on the run from the law for a murder of his neighbour, which he denies.  He doesn't want to go to the police nor his embassy because he believes he'll be detained without trial.

And here's the clincher: he's still hopeful that the situation will be resolved and he'll be able to stay in the country.  USA, you've got to take a good look at yourself.  A billionaire who made his money in your country would rather risk being thrown in a South American prison than stay in your country, which is not a warzone by any stretch.
Posted by Unknown at 22:30