How not to deliver a podcast

One of the perils of a living in a democratic country, whatever that means, is that you elected representatives report to you on the progress in executing their duties and any major decisions they might have made.  So when Barack Obama secured his fiscal cliff deal a few weeks ago he used his weekly address to explain its
benefits to his "fans".

It's okay for youtube users but the audio of the video also gets served as podcast.  I happen to know a lot about podcasts having produced a lot of them coming on five years now.  They are not as widespread as people who make them would like you to believe, and its their fault.  The computer didn't take off until its makers made it simple and intuitive.  Even radio people would just bark "download our podcast" without actually telling their listeners how to get it and where.

Barack Obama's appears to be made for the Madison Avenue and the Silicon Valley crowd because you can't just stream it from the site; you have to copy the RSS feed and paste into to your reader if you're not an iTunes user - which perpetuates the assumption that you have to have an iProduct to download a podcast.  I know a lot of educated, intelligent, well to do people who are flummoxed by podcasts and I'd argue it's because of poorly delivered podcasts. 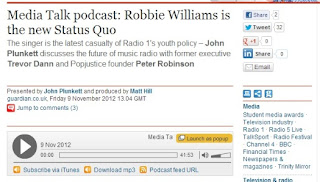 The Guardian is one of very few outlets who understand that a podcast is not a mainstream product: they give you an opportunity to play the audio, subscribe to iTunes, download the mp3 into your hard drive and, if you know what it is, grab the feed for your reader.  Non-geeks will be able to consume this product as well.

So if you want to produce a podcast that even people with a rudimentary grasp of computers can consume, don't do what The White House does, do what the hippies at The Guardian do.
Posted by Unknown at 23:44