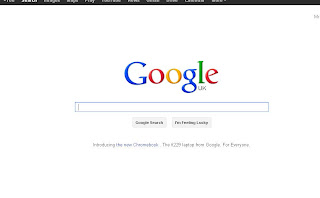 As Apple CEO, Tim Cook was making another attempt to step out of Steve Jobs' shadow by unveiling one of their ridiculous i-products, Google thought they'd seize the opportunity and remind everyone visiting their homepage - everyone using the internet - that they have something similar in the form of the Chromebook.

Just another symptom of the times we live in.  My disdain for Apple is well documented so any company that seeks to depose them off their perch is a friend of mine.  However, I don't think it's going to happen while they're still enjoy the adulation of the media but if anyone has the resources to hang around until the tide turns, it Google.